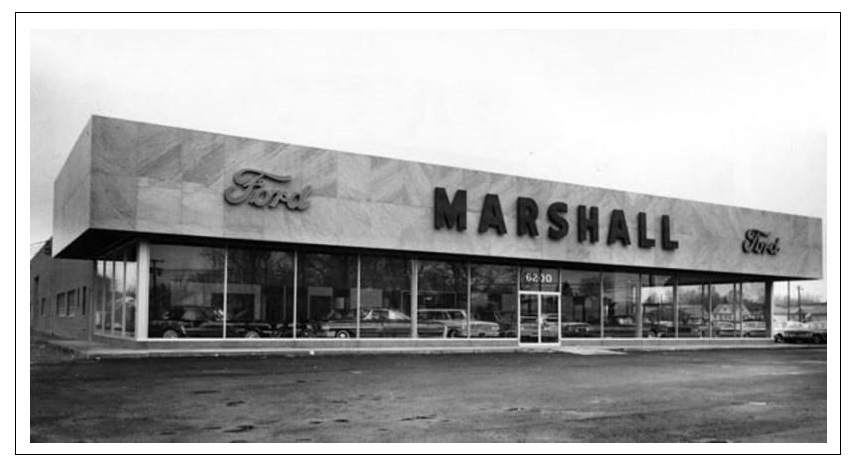 A special contribution by David Smith, an original Marshall salesman! 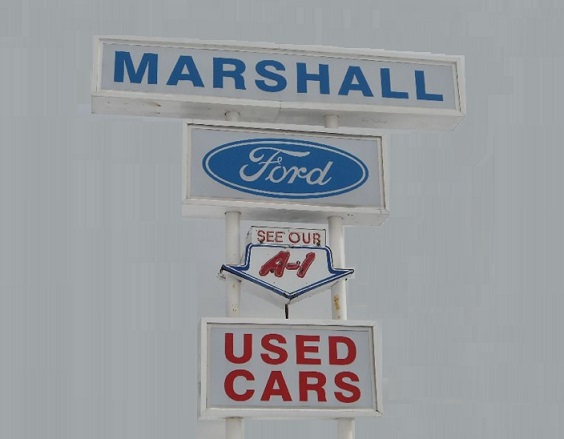 The Marshall Ford sign stood along 6200 Mayfield Road in Cleveland Heights, Ohio for decades. The dealership opened in 1932. The original owner was Sam Marshall.

The general manager was Nick Monda. The new facility for the dealership was opened in 1964, just in time for the arrival of the new Mustangs. 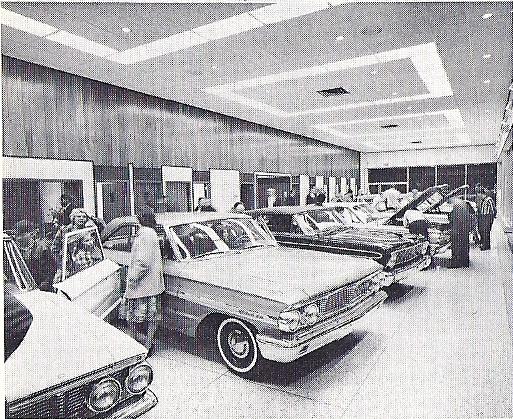 Marshall Motor Company was number 8 in Shelby sales. They sold 230 total cars. A packed showroom is every salesman dream.

The GT40 tour was very sucessful. Ford used the cars to promote the brand. This ad is courtesy of the Cleveland Plain Dealer newspaper.

A GT40 in the Marshall showroom. 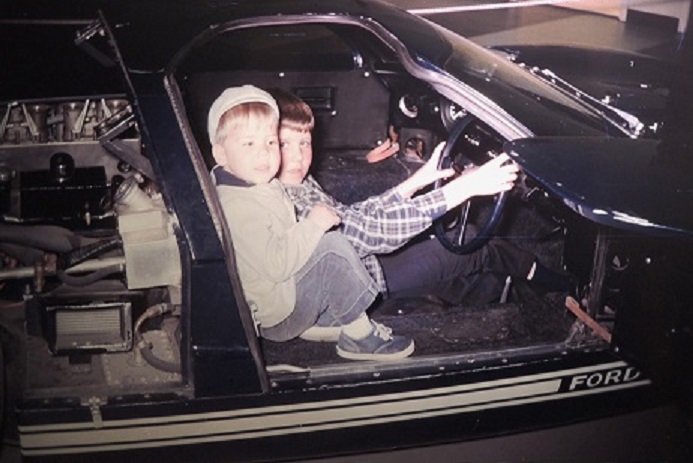 Mark and his brother got to sit in this GT40. It is a production racing coupe # P/1020. It was on tour before becoming a race car. If he wants to see it again, he will need his passport. This racing car is currently in France. 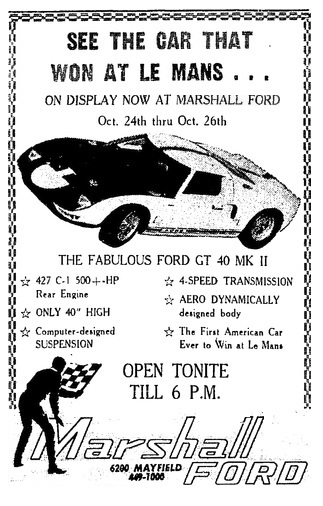 It looks the first appearance was sucessful, so the cars came back! 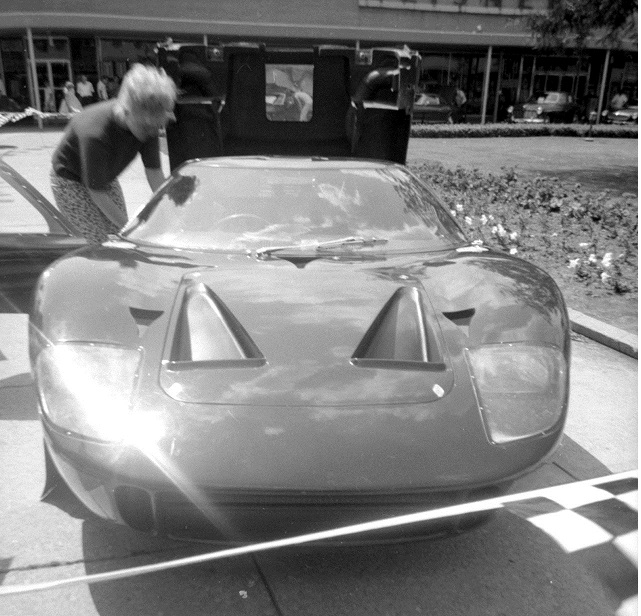 The same car later appeared at a local shopping center. One of the local clubs had a show there. 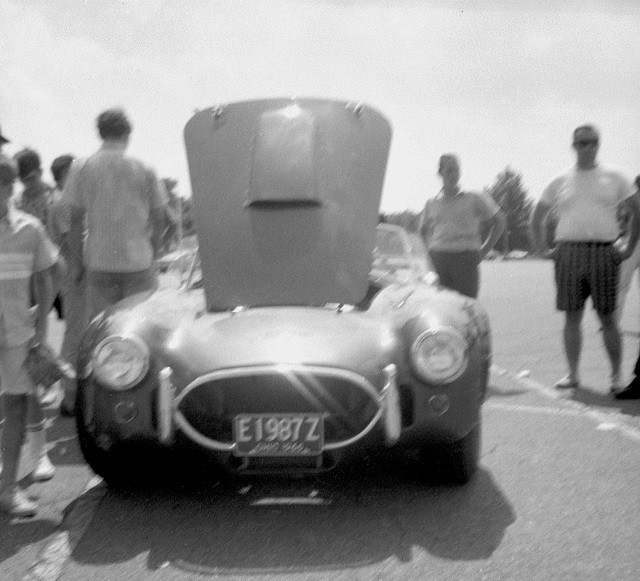 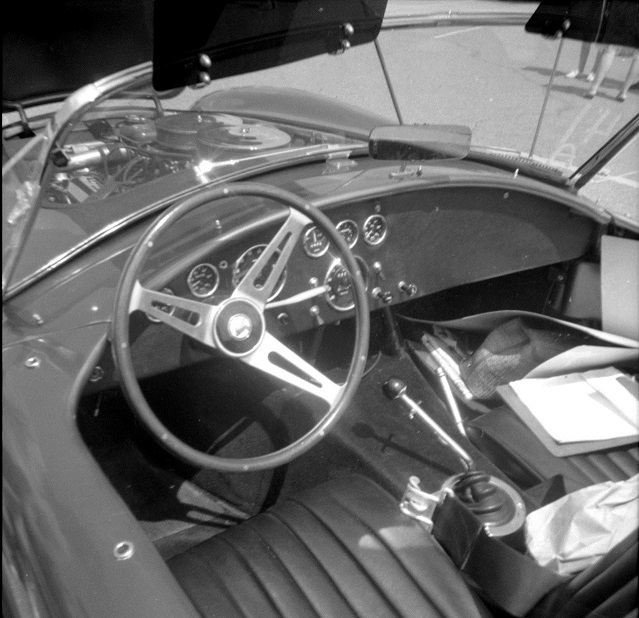 Marshall also sold nine Cobras. They sold two of them to the same guy! He used one for racing and this one CSX 3049 for driving around town. 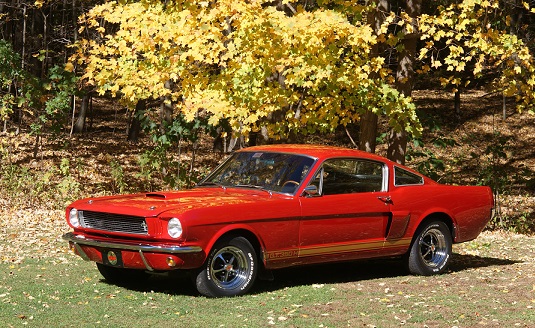 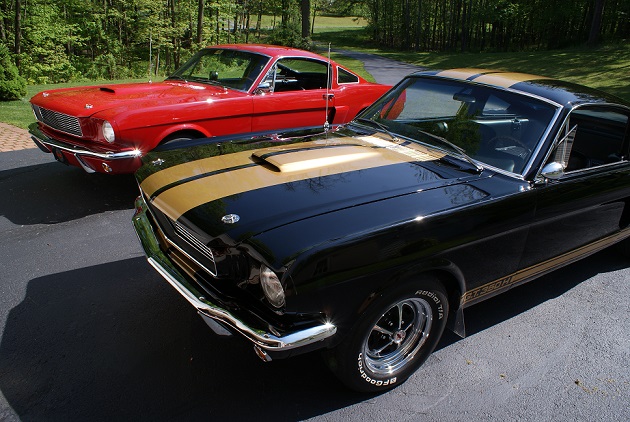 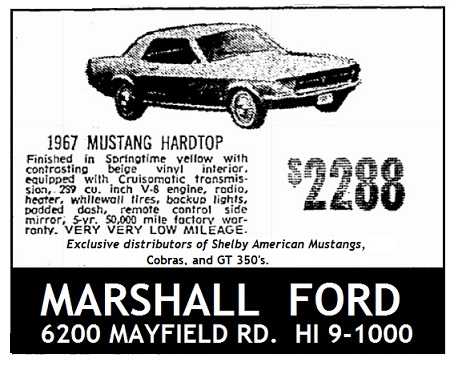 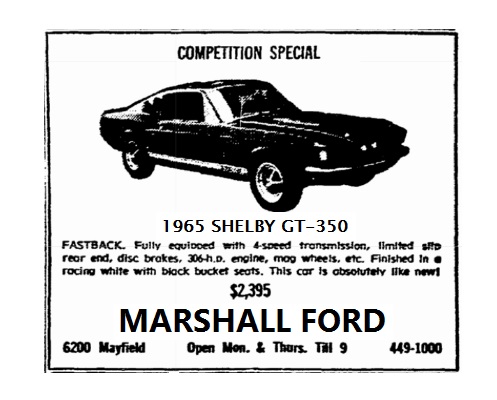 I'm not clear if this is an actually an advertisement for 1965 R-model or not? It appeared in March 1968. Obviously, the picture doesn't match the text. 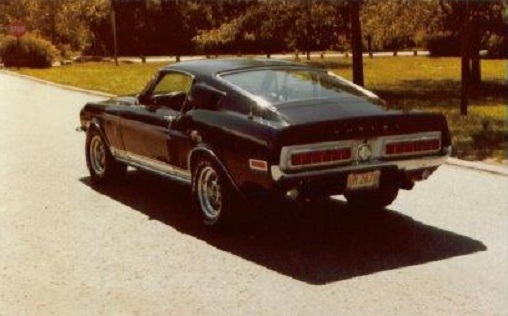 Bernie bought his black 1968 GT500 new from Marshall. He provided a lot of the information in this article. 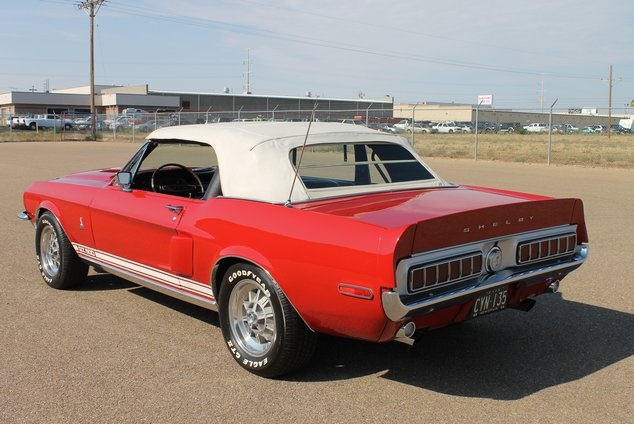 Shelby # 1046 started off as black convertible. 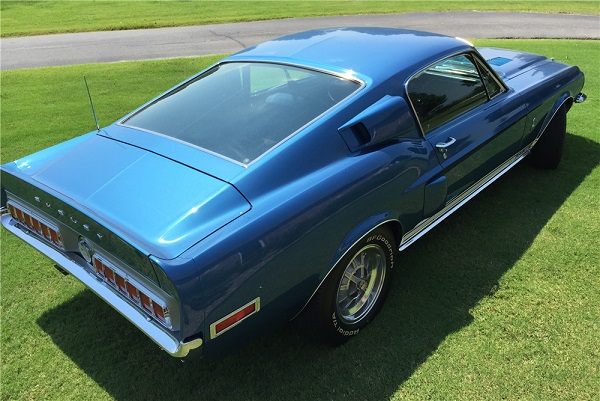 You are really are hard pressed to have more fun than a GT350 convertible. This one is # 2234.

This original postcard has the dealer stamp and a salesman's stamp -David A. Smith. 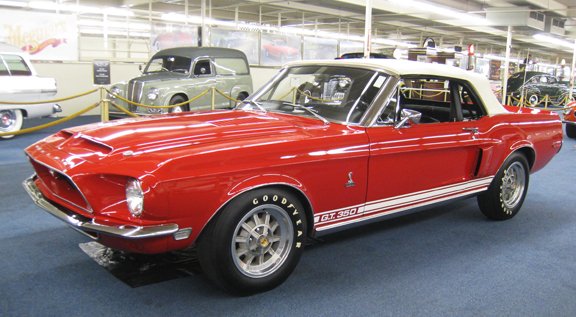 David was one the best Shelby salesman in the country. This original telegram proves it. He was invited to the Ford Motorsports Banquet in November, 1968. 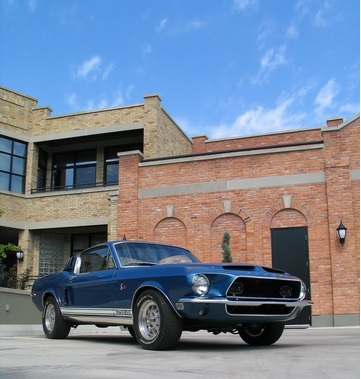 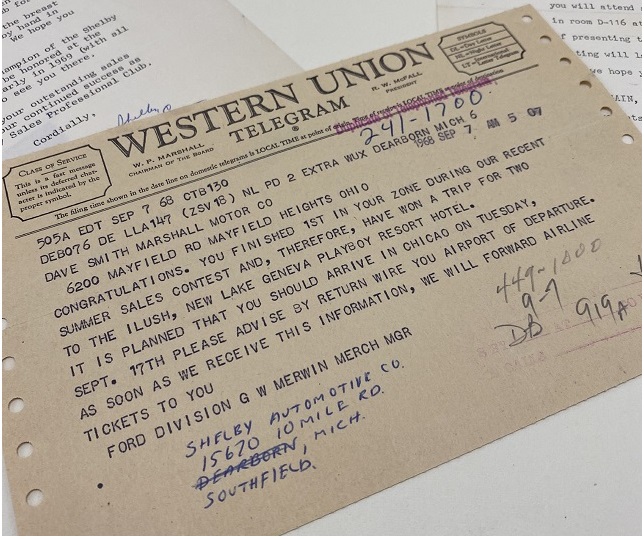 Marshall salesman, David Smith was also invited to the Lake Geneva Playboy Club as a regional winner of the "Summer Sales Contest" 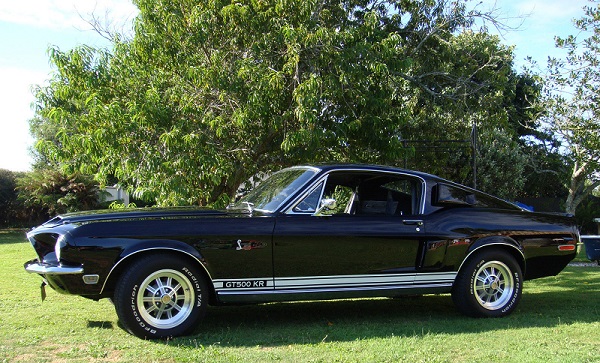 A black GT500 KR is a rare sight, but Marshall actually sold several of them. . . 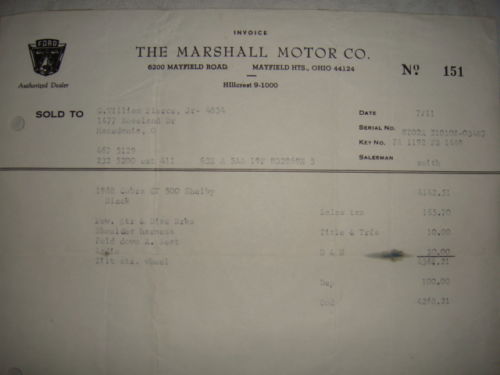 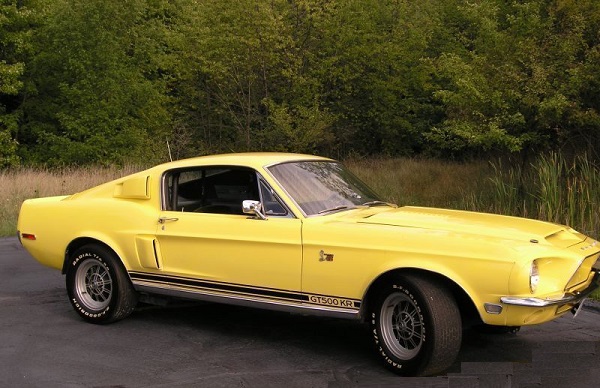 Those special yellow cars have a way of standing out in a crowd. This is # 3516. 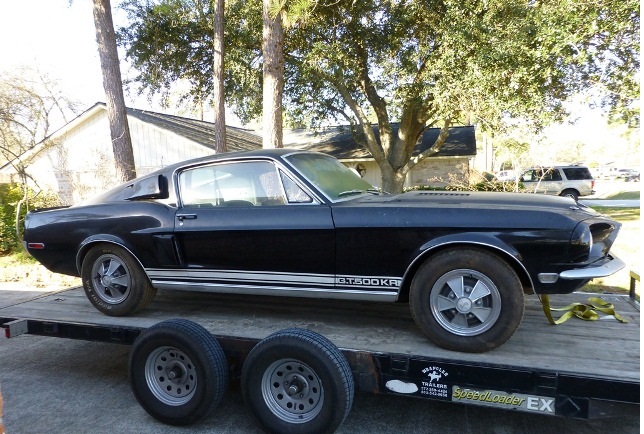 This 1968 still has an original Marshall decal on the decklid. 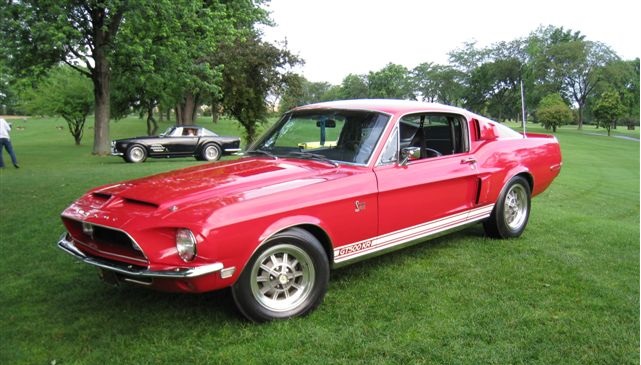 Dan has been very generous sharing things with the website. His car is unrestored and probably one of the best surviors from the class of 1968. He still remembers his salesman's name was Chuck Price. Chuck would later become the General Manager at Marshall. He tried to get the ten spokes prior to delivery, but the dealer had to order them later. 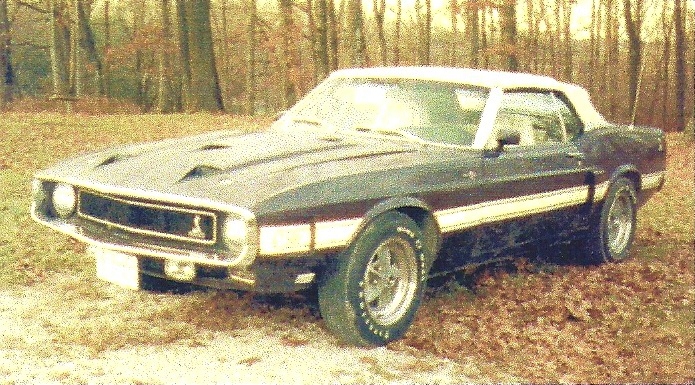 Ed's car is one of the more unique cars ever to be built by Shelby Automotive. While many people believe Shelbys could be special order, the reality was they could not. Of course there is an exception to every rule. Like if you had some major influence. That describes the president of the Goodyear Corporation. The purple car is still wearing its original factory paint. 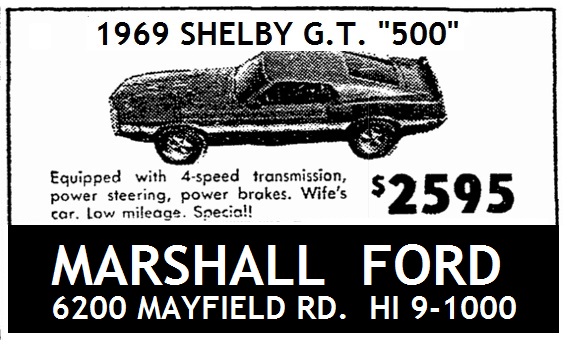 This ad appeared in the Cleveland Plain Dealer in 1971. That must be the reason for the big discount.


Today, the 6200 Mayfield location is occupied by Nick Mayer Ford.


If you have any vintage items associated with Marshall Motor Company, pleased drop me an email.